From the Pastor's Desk

Dear Brothers and Sisters in Christ,

As the pastor and spiritual leader of our faith community, I must confess to my Advent brothers and sisters who are black, brown, or contain more pigmentation in their skin than I do, that I am personally sorry that I have not spoken up and spoken out against the horrendous and egregious act that led to the murder of George Floyd on Monday, May 25.

As of the time of writing this letter, 11 days have passed and I have not publicly denounced the actions of Officer Derek Chauvin, who killed Mr. Floyd by keeping his knee on his neck for 8 minutes and 46 seconds (or the three other Minneapolis Police officers who stood by and watched a fellow officer kill another human by asphyxiation.) I cannot imagine the suffering that George Floyd experienced during these last minutes of his life.

I have not spoken one word of condemnation.  You would think that after 15,840 minutes since this horrible murder, I, as a servant of the Gospel of Jesus Christ, would have had sufficient time to gather my thoughts in order to say something (anything) . . . but  I have remained publicly silent.

I am ashamed of my silence, because in my silence I have remained just as complicit as the 3 police officers who stood by and watched George Floyd be murdered by a public servant who had supposedly taken an oath to protect and serve all members of the community.

So, once again I apologize to my Advent brothers and sisters of color. For, as your pastor, I have let you down in the very moment that you needed me the most.  I have remained silent when you have needed me to speak up. I have stood by passively on the sideline, when you needed me to exhibit a modicum of courage to step out and stand beside you. I am sorry and I ask for your forgiveness.

As the pastor and spiritual leader of our faith community, I confess to my Advent brothers and sisters who are white, that I am personally sorry that I have not spoken up and spoken out against the horrendous and egregious act that led to the murder of George Floyd on Monday, May 25. I have not led by example. I have not embodied the Gospel of Jesus Christ that commands us to do more than say prayerful phrases like “We ask your guidance in creating spaces for helpful conversations around the issue of racism.” This is a well-written, politically correct prayer but we are beyond that now.

More importantly, it is time for us, as Advent Lutheran, to return to our roots and to remember our DNA as a mission congregation.  From the very beginning we have been a community of Christians engaged in the fight for social justice and empowered by the Holy Spirit to be a leader in this movement. We all know this. This is who we are.

I know many of you have been waiting and wondering when, or if, I, as your pastor, would find my voice, speak out without reservation, and publicly take a stand on social justice issues that the Gospel is crystal clear on.  How many passages of Scripture do I need to exegete to know that Jesus is opposed to racism and white supremacy?

I did not intend for this letter to be a declaration, but that is what it has morphed into.

Today, as your pastor, I am unapologetically committed to stand with you and to use the authority I have been given as a called and ordained minister of the Church of Christ to speak out publicly at all times against all forms of injustice and to work diligently to create a world that begins to look more like the reign of God that Jesus spoke about.

By the waters of baptism, we all share in this communal call to strive for justice and peace in all the earth.  So, I ask each of you to join me and to hold me accountable to my commitment and to encourage me to walk with you into those places where I would much prefer to remain silent and stay on the sideline.

Surrounded by thousands of others, I marched with my 17 year old daughter (and several other youth from Advent) at the protest in uptown Charlotte on Tuesday. As we marched together, with our signs held up and our voices chanting together the names of George Floyd and Breonna Taylor, I wondered what new names we will be saying this time next week or the week after but most assuredly soon. (I am a realist and at the same time I am hopeful. I guess that makes me a hopeful realist.)  However, it was an important reminder that striving for justice and peace in all the earth is not a sprint, but a marathon.

As the body of Christ in the world, we will continue to work toward what God has accomplished in Christ Jesus. Christ Jesus is our peace. Through the cross and in his flesh he has broken down the dividing wall and put to death the hostility between all people and created in himself a new humanity (Ephesians 2:14-16).

Your brother in Christ, 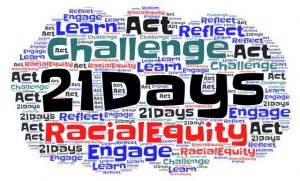 The last few weeks, our nation has been in turmoil. It started as we watched in horror as a 46-year-old African American man died while a white police officer knelt on his neck, literally choking the life out of him. George Floyd’s name was added to a growing list of senseless deaths. Fear and anxiety abound in the African American communities where so many citizens feel unsafe, unsure and overwhelmed. Allies and people of color in our community, across the US and across the globe, are standing together, speaking out and speaking up against racial injustice.

The 21-Day Race Equity Challenge offers a chance to become more educated on the complex issues related to racial justice. Whether you have already started this challenge or want to join, go to www.eddiemoorejr.com to find resources for reading, listening or viewing. They range in time commitment from 3 minutes to a few hours so you can choose the ones that work for your schedule.

We will host 2 guided conversations on some of the topics covered in the challenge materials. Arlene Cash and Carol Schierlmann will host these discussions on June 25th at 7:00 and July 19th at 11:00. The Zoom links will be on adventlu.org under the member dashboard. All are welcome for a respectful and loving discussion of how we, as a Christian community, can come together as a force for positive change.

Join Brooke Watson-Summerour and Carol Schierlmann on June 28th at 7:00 on Zoom to discuss the movie Just Mercy. You can go to justmercyfilm.com to see all the platforms that are showing this movie for free in the month of June. This film is based on a book, so if you prefer to read, please go that route. Zoom link will be on the adventlu.org website in the member section. A message from the film maker and an additional link to the author’s justice initiative are below:

WE BELIEVE IN THE POWER OF STORY.

OUR FILM JUST MERCY, BASED ON THE LIFE WORK OF CIVIL RIGHTS ATTORNEY BRYAN STEVENSON, IS ONE RESOURCE WE CAN HUMBLY OFFER TO THOSE WHO ARE INTERESTED IN LEARNING MORE ABOUT THE SYSTEMIC RACISM THAT PLAGUES OUR SOCIETY.

FOR THE MONTH OF JUNE, JUST MERCY WILL BE AVAILABLE TO RENT FOR FREE ACROSS DIGITAL PLATFORMS IN THE US.

TO ACTIVELY BE PART OF THE CHANGE OUR COUNTRY IS SO DESPERATELY SEEKING, WE ENCOURAGE YOU TO LEARN MORE ABOUT OUR PAST AND THE COUNTLESS INJUSTICES THAT HAVE LED US TO WHERE WE ARE TODAY.

THANK YOU TO THE ARTISTS, STORYTELLERS AND ADVOCATES WHO HELPED MAKE THIS FILM HAPPEN. WATCH WITH YOUR FAMILY, FRIENDS AND ALLIES.

FOR FURTHER INFORMATION ON BRYAN STEVENSON AND HIS WORK AT THE EQUAL JUSTICE INITIATIVE PLEASE VISIT EJI.ORG.

How Charlotte Got Segregated

Tom Hanchett is the retired staff historian for Levine Museum of the New South and author of "Sorting out the New South City, Race, City, and Urban Development in Charlotte, 1875-1975"

Freed in Christ: Race, Ethnicity, and Culture expresses the ELCA’s calling to celebrate culture and ethnicity.

The Equal Justice Initiative is committed to ending mass incarceration and excessive punishment in the United States, to challenging racial and economic injustice, and to protecting basic human rights for the most vulnerable people in American society.

"Our vision is that people and organizations are aware and responding to the racial brokenness and systemic injustice in our world. People are no longer conditioned by a racialized society but are grounded in truth. All are equipped to flourish."